Every year, the Assassin’s Creed series struggles with the idea of inheritance. Like its Templars and Assassins, who are locked in a never-ending struggle for relics, each game picks a side in the question of how strongly should it lean into its now-convoluted ancient lore and incorporate the still-underdeveloped present-day elements.

Assassin’s Creed: Syndicate chooses wisely, leaves out multiplayer entirely, and pushes a lot of that baggage into the background, largely freeing itself up to make the most of Victorian London and have fun with sneaking, climbing, and stabbing.

Syndicate smartly negotiates this internal conflict by dramatising it in the form of its twin playable characters, Evie and Jacob Frye. The former is a devout Assassin, intent on stopping the Templars by tracking down the remaining pieces of Eden.

Her brother Jacob, however, is a pragmatist – a social reformer who rails against the Assassin’s burdensome legacy and wishes to help his city in more immediate ways, seemingly embodying my desire to move on from the tangled mysticism. They’re both extremely likeable, well-drawn protagonists, and the interaction between the two is laced with a lively sibling rivalry that brings levity to otherwise-earnest cutscenes. But their contrasting worldviews have the greatest positive impact on Syndicate’s structure, which is both engaging and meaningful.

You can freely switch between Jacob and Evie at most points, with side missions and open-world activities open equally to both. Campaign missions, however, are different, with Jacob taking the lead in the majority of the core assassinations. This is frustrating, especially since Evie is pitched as the more stealthy of the pair. 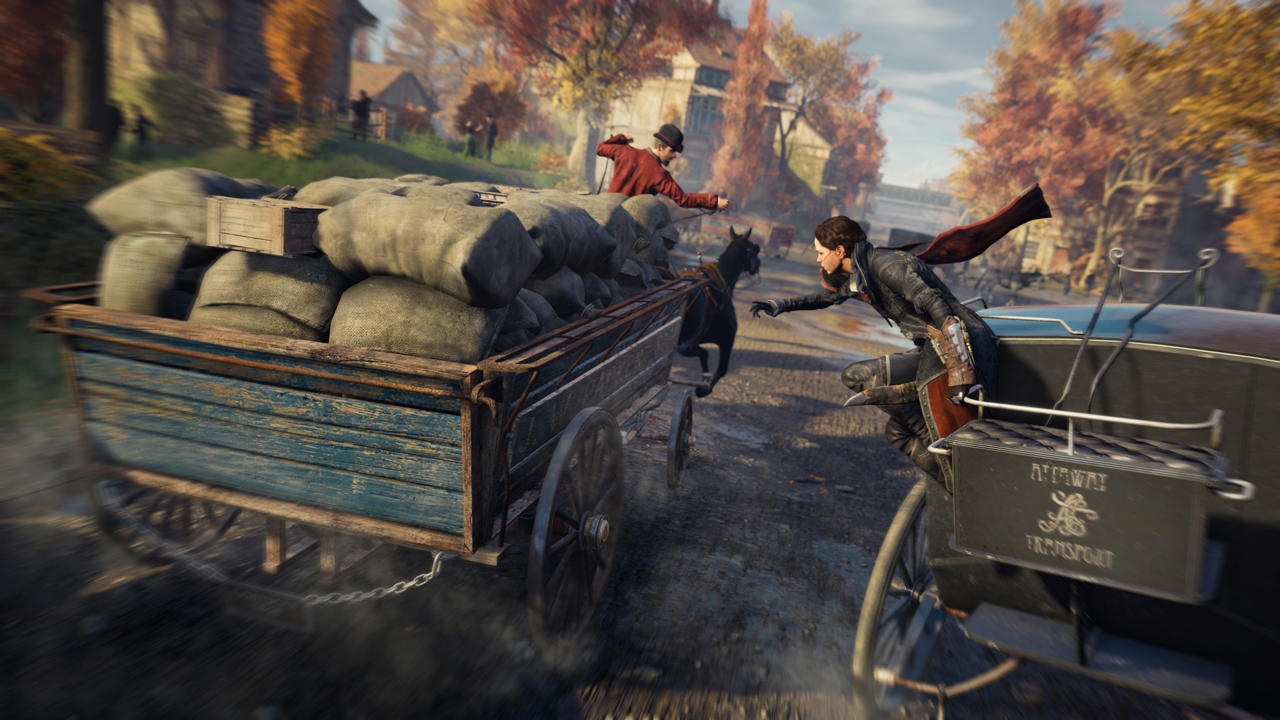 But I soon realised that Syndicate is just not that interested in exploring forgotten tombs in search of dusty relics; it wants to liberate the great city of London from its terrible oppressors. And to be blunt, Syndicate’s a much better experience for identifying more closely with the goals of Jacob.

Despite being sidelined so often, Evie comes across as the more nuanced character, struggling with her sense of duty, where Jacob is a more straightforward bloke with clear goals. By the end of the 20-hour campaign, I felt like I’d probably spent more time with Evie due to prefering her in side missions, and I certainly knew her better. She sees the bigger picture, with her missions tackling problems Jacob can’t even comprehend. Evie also stars in my favourite assassination mission – a nighttime infiltration of the Tower of London.

The Jewel in the Crown

Ah, London… in 1868, it was a bustling, heavily industrialised city, the heart of an unprecedented Empire. It feels like a different type of place to those Assassin’s Creed has visited in the past. The churches of Rome and Paris give way to London’s glistening train stations and infernal factories, its cathedrals to industry and progress.
It’s not an exact replica – the map is nipped and tucked, bringing some landmarks closer together – but on the whole it feels like London, especially key areas like Trafalgar Square and the Palace of Westminster. 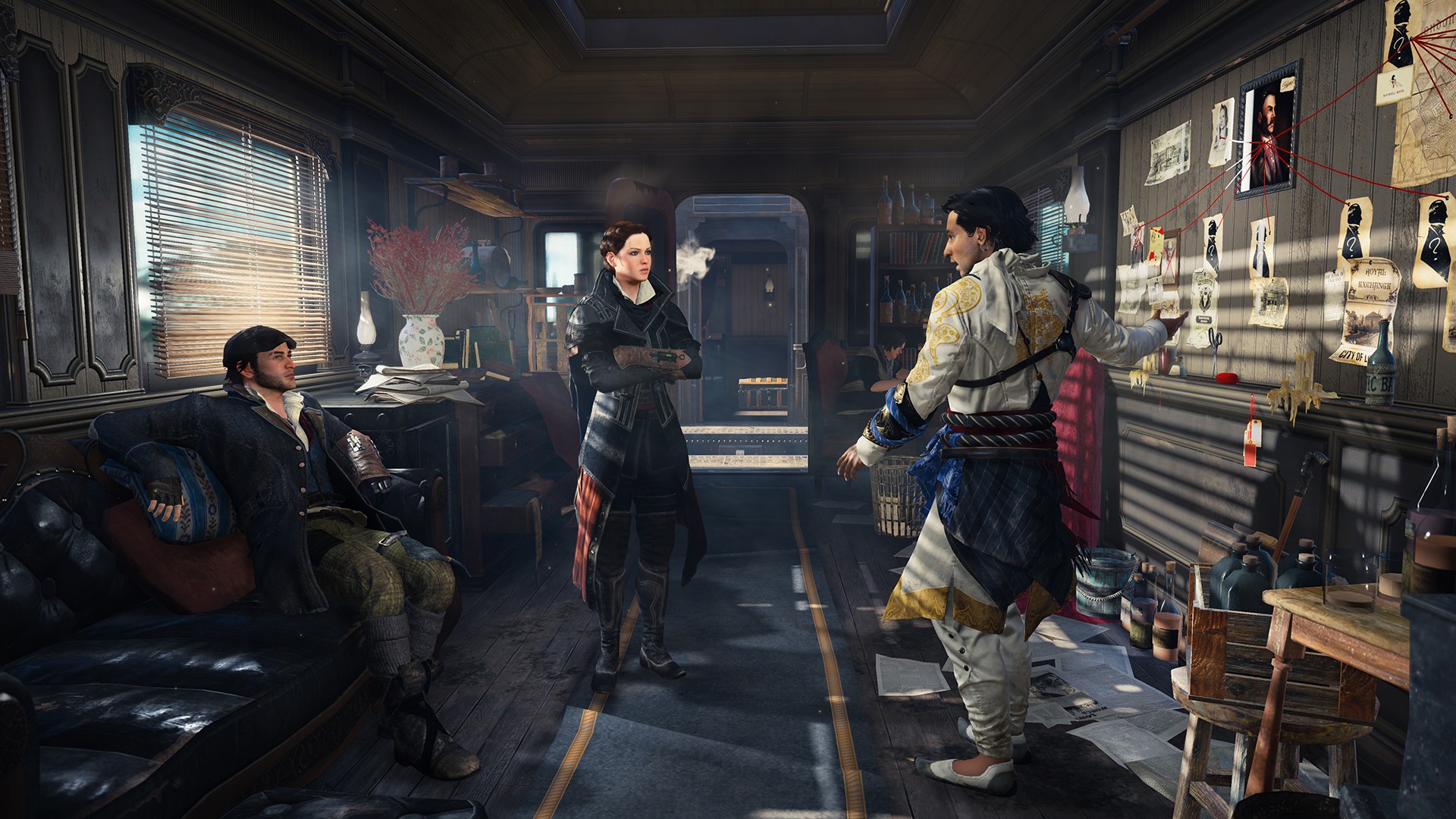 At first, I thought it was fairly ugly – a smear of brown and grey – but it slowly yields its charms. The slums are caked in mud and thousands of chimneys spew forth thick black smoke, but there’s a kind of beauty when you see it blot the sky at dusk. Similarly, walking around the foggy streets of central London by gaslight is wonderfully atmospheric. And after Unity's troubled release, it's worth stating I encountered no noteworthy bugs or performance issues.

Assassin’s Creed Syndicate is the most fun I’ve had with an Assassin’s game since Black Flag. In fact, I liked it more. Apart from its ill-fitting conclusion, it never takes itself too seriously and delights in the rich possibilities of its Victorian setting and great new grapple gun.

As you explore its contrasting boroughs, you glean some sense of what powered this great city in the 19th century. The story missions capitalise on this by exploring different spheres of influence, which when combined with elements like mass transit, heavy industry, and law enforcement, make this feel like a different type of city than has been featured in the series to date. Best of all, Syndicate asks you to take London back in a way puts the last few games to shame.

Be it Baldur's Gate or Fallout, isometric RPGs represent the role-playing genre at its best. Here are the best isometric RPGs, ranked.